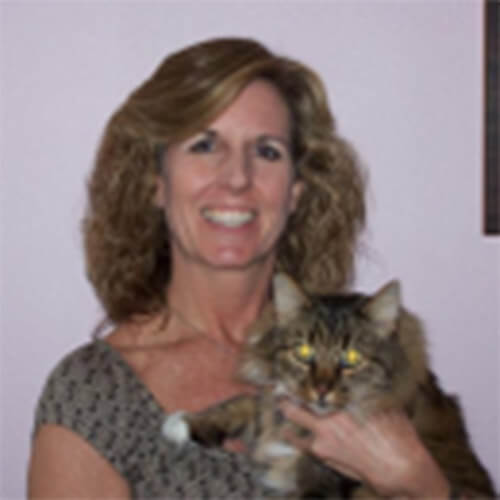 Dr. Jacqueline McCool grew up in south Florida. She realized at the age of nine that she wanted to become a veterinarian to help as many animals as possible after her first cat Papillion was hit by a car and killed.

She attended Auburn University in Alabama for both undergraduate studies and vet school. She received her Doctor of Veterinary Medicine degree in June 1991. She practiced in Florida for one year then moved to California to be closer to her family.

Her two children, Ryan and Caitlin are also animal lovers. They currently share their home with a Dachshund/Chihuahua mix named Guinness, a Cavelier named Jameson, and care for multiple neighborhood cats. When she is not working, Dr. McCool enjoys working out and doing outdoor activities with her family.

We use cookies on our website to give you the most relevant experience by remembering your preferences and repeat visits. By clicking “Accept”, you consent to the use of ALL the cookies. Please Note: inaction is the same as clicking “Accept”.
Do not sell my personal information.
Cookie SettingsAccept
Manage consent

This website uses cookies to improve your experience while you navigate through the website. Out of these, the cookies that are categorized as necessary are stored on your browser as they are essential for the working of basic functionalities of the website. We also use third-party cookies that help us analyze and understand how you use this website. These cookies will be stored in your browser only with your consent. You also have the option to opt-out of these cookies. But opting out of some of these cookies may affect your browsing experience.
Necessary Always Enabled
Necessary cookies are absolutely essential for the website to function properly. These cookies ensure basic functionalities and security features of the website, anonymously.
Functional
Functional cookies help to perform certain functionalities like sharing the content of the website on social media platforms, collect feedbacks, and other third-party features.
Performance
Performance cookies are used to understand and analyze the key performance indexes of the website which helps in delivering a better user experience for the visitors.
Analytics
Analytical cookies are used to understand how visitors interact with the website. These cookies help provide information on metrics the number of visitors, bounce rate, traffic source, etc.
Advertisement
Advertisement cookies are used to provide visitors with relevant ads and marketing campaigns. These cookies track visitors across websites and collect information to provide customized ads.
Others
Other uncategorized cookies are those that are being analyzed and have not been classified into a category as yet.
SAVE & ACCEPT